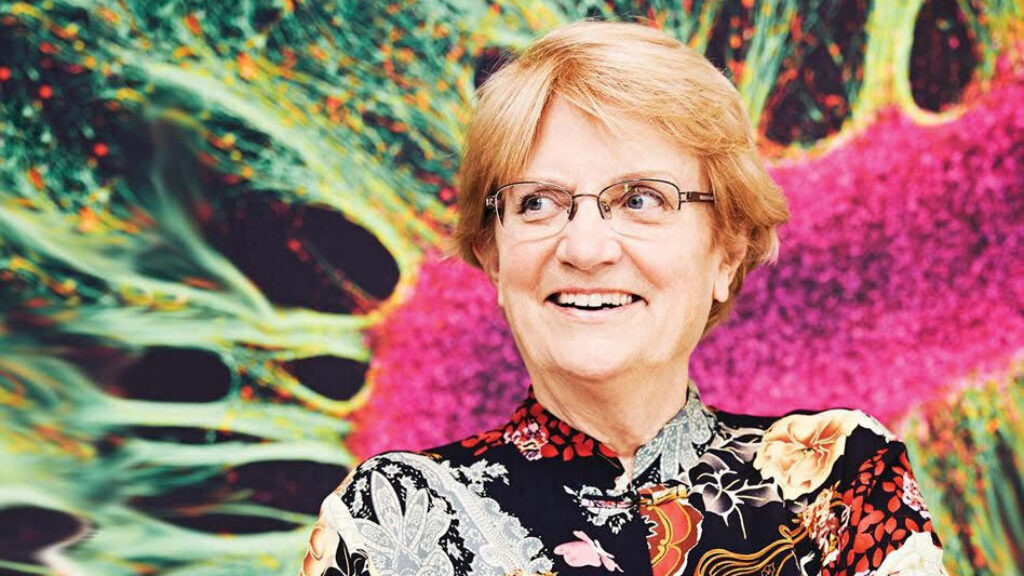 When Nancy Hopkins joined the faculty of the Massachusetts Institute of Technology nearly 50 years ago, she didn’t think that her gender would have any impact on her career. “I was a person who thought that there really were no issues left for women to worry about in academia, once they were able to get jobs,” she said. But when she saw male colleagues receiving better treatment and more opportunities, she began to understand that a “strange undervaluation of women” was shaping her career and the careers of her female colleagues.

“The worst thing is realizing,” she said. “It’s a hard thing to accept.”

Hopkins, now a professor emerita of biology at MIT, knew women scientists faced barriers outside of academia, too. In 2018, she formed the Boston Biotech Working Group with MIT colleagues Susan Hockfield, a former MIT president and professor of neuroscience, and Sangeeta Bhatia, a professor and researcher of biomedical engineering who has co-founded and is on the advisory board for several biotech companies. The group’s 39 members include top venture capitalists, executives from the Boston biotech scene, MIT faculty, policymakers, and academic administrators. Together, they’re working to both increase the number of women serving on the boards of biotech companies and open up more ways for women faculty to found their own companies.

On Tuesday, the group also published a study in the MIT faculty newsletter, which found that between 2000 and 2018, women faculty participated in only 9% of the institute’s events related to biotech and other industries. And if women entrepreneurs founded companies at the same rates as men, they would have launched 40 more companies out of MIT in the same time period. The report also announced the Future Founder Initiative, which will include a bootcamp for female MIT faculty members focused on entrepreneurship; a mentor-driven “Shark Tank”-style competition; a commitment by venture capital firms to ensure 25% of the boards of the companies they control will be made up of women in two years; and a fellowship program at venture capital firms for female faculty members.

“I think this is as good a model as I’ve seen,” said Hopkins.

STAT talked more with Hopkins about what led her to help form the working group, her role in the group’s recent study, and her hopes for the future of women in biotech and the sciences. The interview has been edited for length and clarity.

How did you first become involved in advocating for women’s advancement in science?

I joined the faculty [at MIT] when I was 30 years old. I had difficulties, but I always thought, you know, science is competitive. It took me a very long time to realize that there was a difference in how men and women were being treated and progressing. The women got together and discovered that they’ve pretty much all figured it out independently. Then … we studied it as a group with MIT support. We had a committee that went to the dean of science, and he made a committee and then he put men on the committee who had been department heads. They listened to the women’s stories, and they could see the pattern. And we documented it with a lot of data — it took a long time.

I chaired the first committee in ’95 to ’97 and then another woman in the group chaired two more years. Then in 1999, we wrote this report, which we released in the MIT faculty newsletter, and I honestly had no clue what was about to happen. I really thought our problem was that of a few elite women at lead institutions who wanted to do very high-level science. Of course, it turned out it was a universal problem. We were then buried, I mean deluged, by press coverage and women writing from all over the world, literally, to the present.

What led to you helping form the Boston Biotech Working Group?

A woman came to see me, I think in 2012, and she had seen a list of 100 scientists who had been funded by venture capitalists or biotech companies. And only one person on the list of 100 was a woman. I knew this was going on, but I didn’t really realize it was still so extreme. A couple of us [women faculty] met and asked almost every woman in the MIT school of science whether they’d ever been asked to do this with their colleagues, and nobody had ever been asked. And they weren’t starting their own companies.

Sangeeta [Bhatia] is really the moving force from here. I mentioned it to her and she said, that’s not true, because she had started companies and engineers do start companies. So she went and got some preliminary data, and that data showed that you could find women in engineering who were starting companies. But some of those women told us that they had these perceptions, that there was a difference in the ease of raising money and [that they were] not being included in male colleagues’ companies. I think it was remarkable when Susan Hockfield stepped forward. Because she had been the president of MIT, I think she had a big picture view of it. … So when Susan joined us, with Sangeeta, they really got things going.

What role did you play in the study that the working group recently completed?

The role I played was, having done the [1999] MIT report, is how do you look at data. To understand data with small numbers, you can’t just look at the numbers, because they’re too small. The only way you can do it probably in the university is people stay on the faculty for very long periods of time, so that we don’t have rapid turnover. You have to know what field people work in, you have to know why some people might be participating and others not. And that takes a lot of faculty involvement. What took a lot of time for me was helping the people who are collecting the data interpret the data, and then going and talking to other colleagues at MIT about, well, why do you think women don’t do it in this department? Why do they do it in that department? And all that takes years of knowledge of the university.

How have things changed since you first started researching the experiences of women in science?

For me, to have lived long enough to see a woman become the president of MIT, that was already something I didn’t expect to live to see. I love watching Susan, running this meeting, and Sangeeta, and these other people at the table, and there is a mixture of very high-level women and men. And you see, oh my gosh, women really do have power. There aren’t many, but there are some. To me, that was breathtaking. You can’t say there aren’t powerful women now. And they’re able to see the problems that might not have been so visible.

What effect do you hope that the Boston Biotech Working Group and the Future Founders Initiative will have?

Now that they’ve done it [the recent study], if people want to continue this, they can use a methodology to do it again, in five years and see, what’s it look like now? And I think they probably will do that.

I think for myself, I would say, you want every person who comes to a place like MIT to soar as high as they can. You want people to feel that they are free to participate in all the things wherever it leads them. So I think the goal is just that people who really want to do this [pursue biotech] don’t face any greater barrier than anybody else. That everybody has equal access and education to do as they want to, but nobody should ever feel pressured to do this ever. Because some people really just want to do basic science, they don’t want to do anything else. But for those who do want to do it, and for those who don’t know if they do because they don’t know about it, and for those who just want to be able to train their students and help them if they’re interested in doing it — that’s the only purpose. That’s my goal.

Do you have any other hopes for the future of biotech?

Personally, I think everybody this year has been very much affected by the race issues in this country. I think when you see what the exclusion and how costly it is on so many fronts, what you really want is an industry that reflects the population of your city. And so I think that this effort has to go into that direction, too. And so my hope is, you know, one day, this industry will look like Boston.

A committee that advises the Centers for Disease Prevention and Control voted ...

WASHINGTON — The trade group for the pharmaceutical industry on Friday sued to ...