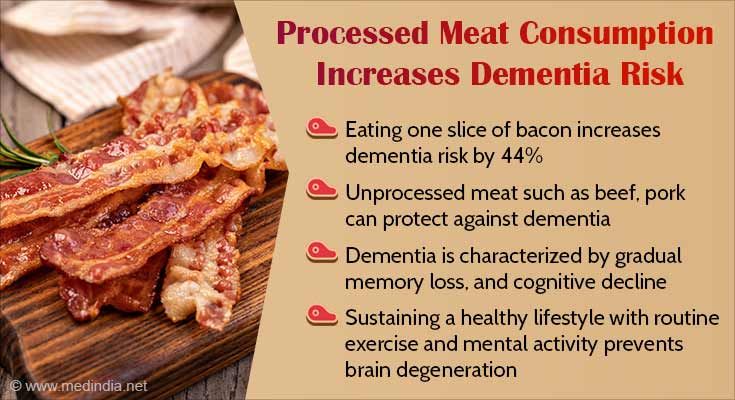 Earlier evidence supports the association of increased risk of dementia with meat consumption. But the present study is the first large-scale study of participants over time to examine a link between specific meat types and amount and the risk of developing the disease.


“Worldwide, the prevalence of dementia is increasing and diet as a modifiable factor could play a role. Our research adds to the growing body of evidence linking processed meat consumption, to increased risk of a range of non-transmissible diseases”, says Lead researcher Huifeng Zhang, a Ph.D. student from the University of Leeds’ School of Food Science and Nutrition.

The study team enrolled 493888 participants from the UK Biobank, a database containing in-depth genetic and health information from half a million UK participants aged 40 to 69, for analyzing the link between consumption of different types of meat and the risk of developing dementia.

Questions on the frequency of different kinds of meat consumption, with six options from never to once or more daily, were collected in 2006-2010 by the UK Biobank. Moreover, the data from people who did not eat red meat and instead consumed a vegetarian or vegan diet were not analyzed for the risk of dementia risk.

Over the average period of eight years follow-up, 2,896 cases of dementia (men more than women) emerged among the participants enrolled. The cases generally were older, more economically deprived, less educated, or had a history of stroke, smoking, sedentary lifestyle, or family history of dementia.

On the other side, it was also observed that people who consumed 50g of unprocessed red meat, such as beef, pork, or veal, per day were 19% less likely to develop dementia, thereby exerting a protective role.

“Further confirmation is needed, but the direction of effect is linked to current healthy eating guidelines suggesting lower intakes of unprocessed red meat could be beneficial for health”, says Ms Zhang. Thus understanding and exploring the potential risk factors for dementia may reduce the prevalence rate of this debilitating condition.

The MIND diet
(a hybrid of the Mediterranean and DASH diets) created to prevent dementia and slow the loss of brain function that can happen with age. Foods emphasized on the MIND diet include whole grains, berries, green leafy vegetables, fish, poultry, beans, nuts, and olive oil. These foods contain nutrients that promote good brain health by lowering oxidative stress, inflammation, and the formation of beta-amyloid plaques.

Breas Medical has received FDA approval for the Vivo 45 LS, one of the smallest,...

So, you’re finishing residency this year. Congrats! Sort of. Chances are, you ...