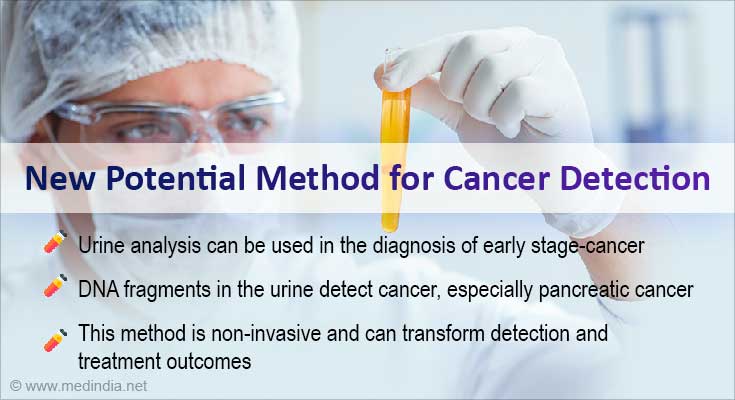 It was previously believed that the DNA fragments(small pieces of DNA) in urine were degraded at random and were too short to provide any meaningful information about a disease as complex as cancer.

‘In early cancer diagnosis, especially pancreatic cancer, urine analysis has shown promising results as it determines the presence of short DNA fragments in the urine. This method is non-invasive and can be used to monitor cancer patients more frequently.’
Read More..


Scientists from TGen and their colleagues from Baylor University and Phoenix Children’s Hospital have found that these DNA fragments are not random and indicate a difference between healthy individuals and those with cancer.

Senior author of the study, Muhammed Murtaza, M.B.B.S., Ph.D., an Associate Professor and Co-Director of TGen’s Center for Noninvasive Diagnostics has said that there are various steps between where they are now and where they want to be- detecting cancer from a urine sample. However, the results of this study are an encouraging first step.

Previously Dr. Murtaza led a team of TGen scientists to develop the technique of liquid biopsy. Liquid biopsy reduces the need for many surgical biopsies of suspected tumors. Hence, the physicians can monitor cancer in their patients more frequently as it is a less invasive technique than surgical biopsy.

Urine samples further reduce the physical invasiveness to zero as the sample can be collected at home and mailed in for analysis, thus eliminating the need to visit the lab.

How Was This Method Developed?

Scientists collected tissue samples from children (malignancies spread fast) with various cancers and adults with pancreatic cancer (early detection is critical) and mapped the DNA fragmentation profiles in their urine.

They found that certain regions of the genome were protected from fragmentation in urine from healthy individuals. However, the same regions were more fragmented in patients with cancer.

The lead author of the study, Ajay Goel, Ph.D., chair of the Department of Molecular Diagnostics and Experimental Therapeutics and Associate Director for Basic Science at City of Hope is a leading expert in developing early-detection blood tests for colon, pancreatic and ovarian cancers.

Dr. Goel said, “If the study results come to fruition, our urinalysis technology would be a remarkable breakthrough in the detection of many cancers, especially in pancreatic cancer. If cancer is detected early, it could substantially lower the mortality rate for what is currently the third leading cause of cancer death in the U.S.”

Even though the early results are promising, the scientists indicate that they need to test their findings in much larger populations of cancer patients and identify differences between men and women, young and old, and those with co-morbidities, such as diabetes and other chronic diseases.

One of the paper’s authors, Daniel D. Von Hoff, M.D., TGen Distinguished Professor said, “This is a fundamental new finding and provides a potentially dynamic path forward for the early diagnosis of cancer, given that urine is one of the easiest samples to collect. If follow-on studies yield positive results, I could one day see this test becoming an integral part of one’s annual physical.”

There’s a rare and touching symbiosis in Damien Fair’s marriage. The prominent ...

“You that seek what life is in death,Now find it air that once was breath,New ...