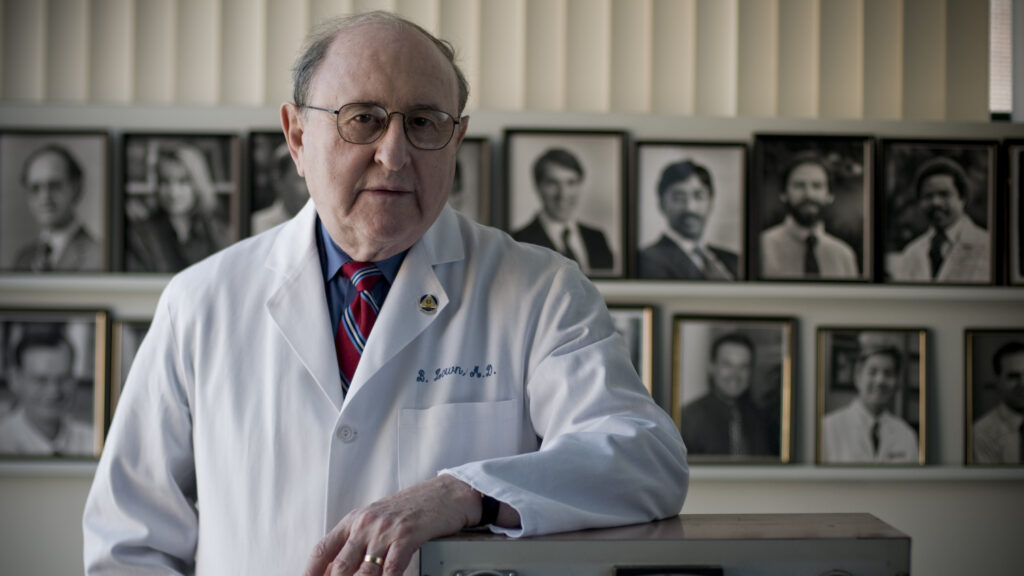 I have long thought that there are three types of physician.

The first is fascinated by the intricacy and complexity of biomedical science. The second finds inspiration in the personal relationship between doctor and patient. The third is committed to the broader context of health, to social justice and to making the world a better place.

These three groups have boundaries that are necessarily fuzzy, and many doctors belong to one or two of them. Very few belong unequivocally in all three. Bernard Lown, who died recently at age 99, was one of these.

I had the privilege of meeting Lown in 2013, but came to realize that he had exerted a profound influence on many aspects of my career long before then. (You can see a timeline of his life and achievements here.)

When I first qualified as a doctor and was worrying about the potassium levels in patients taking digoxin, a heart drug, I had no idea I was using research Lown had published when I was still in primary school. Later, when I was on the crash team running along hospital corridors pushing a defibrillator trolley to restart a patient’s heart, I had no idea that it was Lown’s tenacious research that led to the development of the first defibrillator.

His research record is extraordinary in its reach and the extent to which it changed clinical practice across the world. His insights were often initially controversial but have undeniably stood the test of time. As Lown himself wrote: “I prefer to go out on a limb for one simple reason: that is where the fruit grows.” (All the quotations here are from Lown’s 1995 book, “Practicing the Art while Mastering the Science,” unless otherwise stated.)

Lown insisted that “the art of medicine is a process for nurturing a special human relationship that champions a partnership for healing.” He could so easily, like many others, have been carried away with the success of the brilliant technologies he helped invent. Yet he was always quite clear that the burgeoning of biomedical technology risked undermining the power of the human relationship between doctor and patient.

He understood that technology cannot understand or relieve fear, nor can it locate hope in the story and context of a life and a family. “The physician is not a glorified repairman of a broken-down machine; being treated is a human being with a mind and a soul.” Lown recognized the extent to which patients can be damaged when doctors are carried away by technological procedures, particularly when these are encouraged by financial or professional conflicts of interest.

The depth of Lown’s affection for, and commitment to, individual patients was confirmed by his not being above losing his temper with them when they seemed to be sabotaging their own health or their recovery from illness. I know from my own experience how uncomfortable and guilty a doctor can feel when this happens, but also know how extraordinarily effective it can prove in the long term. Lown told many stories that confirm this.

He understood that illness and disease have the potential to permeate the entire range of human experience and that the doctor-patient relationship needs to operate across this very broad front. He wrote that “there is no better source for surmounting the agony and uncertainty of clinical judgment than by drawing from the deep well of our cultural legacy,” insisting that his students and junior physicians read novels and draw on wisdom from across all arenas of human imagination and understanding.

Judaism was central to Lown’s cultural inheritance. He was born into a Jewish family in Lithuania that moved to the United States when he was 13 years old. He described how his moral conception of medicine was shaped by his Jewish heritage, citing this passage from the Talmud: “Who can protest an injustice and does not is an accomplice.”

He was incensed by injustice and by abuses of power and technology that hurt the innocent. During the Vietnam War, he helped organize the Committee of Responsibility to Save War Burned and War Injured Children. Between 1966 and 1978, it helped bring about 100 severely injured children to the United States for treatment and rehabilitation.

He again showed his commitment to taking responsibility by becoming an instrumental founder of the group International Physicians for the Prevention of Nuclear War in 1980.

Two years later, the group’s second congress was held in Cambridge, England, with more than 400 participants. At this point I was once again walking in his shadow, involved in writing a furious letter to the Journal of the Royal College of General Practitioners protesting against its decision not to allow the organization’s president at the time to attend the meeting because it would be “too political.” I think Lown would have been amused by our miniscule contribution to the cause, which included this statement: “The only meaningful medical response to nuclear war is to strive to prevent it. Even if we assume that the advocacy of nuclear disarmament is a political act, by its own declared standards the College stands condemned if it sidesteps this issue because of that.”

In 1985, the Nobel Peace Prize was awarded to Lown and his friend and colleague, Russian cardiologist Eugene Chazov, on behalf of the International Physicians for the Prevention of Nuclear War. In his Nobel Lecture, “A Prescription for Hope,” Lown declared: “The ‘myth of the other,’ the stereotyping and demonizing of human beings beyond recognition, is still pervasive and now exacts inordinate economic, psychological and moral costs.”

In December 2013, I was invited to speak at a conference organized by the U.S. institute that bears Lown’s name. The day before the conference, he and his wife Louise invited me to tea at their home in Chestnut Hill just outside Boston. I had some trouble convincing myself that this was really happening and that I was really sitting there drinking tea and talking to the Bernard Lown.

As we said goodbye, he gave me a copy of his short book “Practicing the Art While Mastering the Science,” which served to continue our conversation — and does to this day.

As with all my heroes of previous generations, I wish that I could have known Lown in his unstoppable prime. Yet I feel honored to have met him and I know that his death leaves the world a smaller and meaner place.

Iona Heath is a retired general practitioner and a former president of the U.K. Royal College of General Practitioners.

Seema Verma, the former Centers for Medicare and Medicaid administrator, is ...

Researchers at MIT have developed a wearable sensor that can detect small ...