“Learn to interact with people who are different from you. It makes you a better human being.” – Rupert Nacoste

Life will change for the better once one understands self and the people in life. Social psychology teaches us the ins and outs of human psychology by learning psychology from every possible angle!

Social psychology is the branch of psychological science that is mainly concerned and perturbed with understanding how the presence of others affects our thoughts, feelings, and behaviors. It is all about investigating the ways different groups function, the costs and benefits of the social status, the influences of culture, and all the other psychological processes that do involve two or more people.

Social psychology is such an exciting science precisely because it tackles issues that are familiar and quite relevant to our everyday life. Humans are ‘social animals.’ We live together in groups and unlike animals, we care a great deal about our relationships.

We do spend a huge amount of time thinking alone, interacting with other people and researchers are interested in understanding these thoughts as well as actions. Giving up a seat on the bus for another person is certainly an example of social psychology. So is disliking a person because he is wearing a shirt with the logo of a rival sports team. Instances of flirting, conformity, arguing, trusting, competing – these are all relevant topics that do interest social psychology researchers.

Social psychology feels so close to home because it often deals with the universal psychological processes to which people can easily relate to. By taking a look at the negative psychological experiences of people who do not feel they belong or people who feel lonely or even isolated are more vulnerable to depression and problems with physical health.

Social psychology is the study of group processes: how we do behave in groups and how we feel and think about one another as well. It is important to note that social psychology is not just about looking at social influences, but also to look at social perception and social interaction, as they are also vital to understanding social behavior.

While it is indeed not easy to summarize the various areas of social psychology research, it can also be helpful to lump them into major categories as a starting point to wrap our minds around the same. There is, in complete reality, no specific number of definitive categories, but for the purpose of illustration, let us categorize into five divisions. 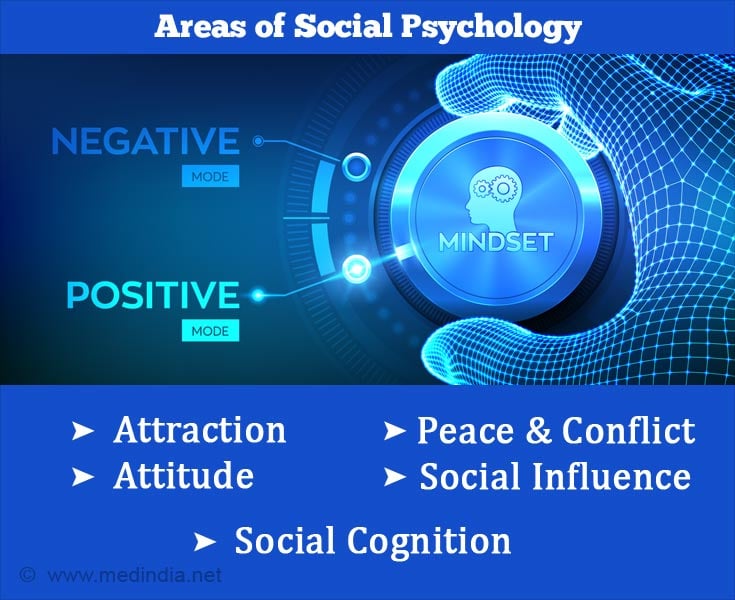 Most social psychology research topics do fall into any one of these below areas:

Attractiveness is actually, in part an evolutionary plus biological process. Certain features such as smooth skin are actually signals of health and reproductive fitness, something especially important when scoping out and accessing strangers. Once we know a person, it is totally possible to swap and exchange those biological criteria for the psychological ones.

People tend to get attracted not only towards muscles and symmetrical faces but also towards kindness and generosity. As more information about a person’s personality becomes available to us, it becomes the most important aspect of the very person’s attractiveness.

Understanding how attraction works is more than an intellectual exercise; it can also lead to better interventions and involvement. Various insights from studies on attraction can find their way into the public policy of conversations, couples therapy and even sex education programs.

A large amount of study in social psychology has been focused on the very process of attraction. The study of attraction covers up a wide range of topics. It can begin with the first impressions and can extend towards courtship and commitment. It does involve the concepts of beauty, sex, and evolution. Attraction researchers might study stalking behavior, divorce or remarriage. They might even study the changing and evolving standards of beauty across decades.

Attitudes are opinions, feelings, and beliefs about a person, concept, or a group. People hold attitudes about all types of things such as the films they see, political issues, and even what constitutes a good date.

Social psychology does share with its intellectual cousins’ sociology and political science a complete interest in attitudes.

Social psychology researchers are totally interested in what attitudes people do hold, where these attitudes come from, and how they change over time. Especially, when it comes to the elderly, military veterans, or people with mental disabilities. Among the most studied topics in attitude research are those of stereotyping and prejudice, respectively. Although people often do use such words interchangeably, they are quite different concepts. 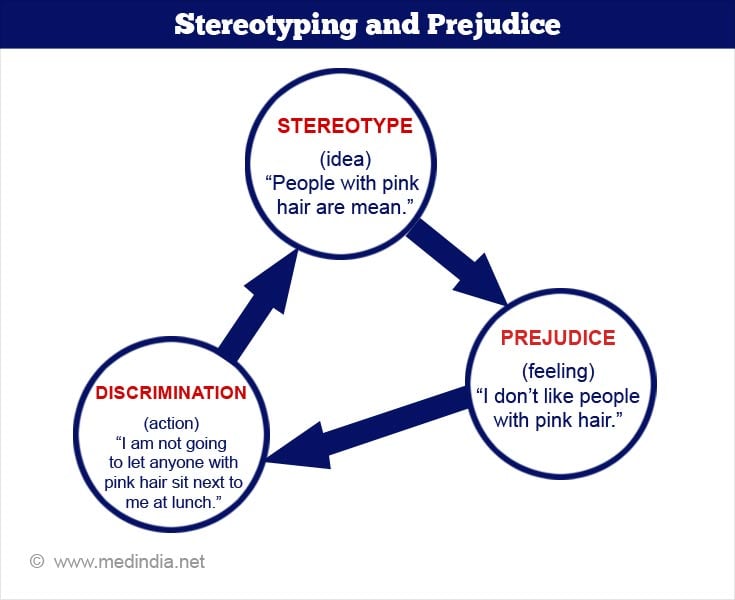 Stereotyping is a way of using information through shortcuts about a group to navigate the social situations or making the decisions effectively. Stereotypical information may or may not be correct. Also, stereotypical information may be positive or negative. Regardless of the accuracy, people do use stereotypes because they are efficient and inescapable ways in dealing with the huge amounts of social information witnessed. It is important to keep in mind, that such stereotypes, even if they are accurate in general, likely do not even apply to every member of the group. As a result, it can seem unfair to judge an individual based on the perceived group norms.

, on the other hand, does refer to how a person feels about an individual based on their group membership interactions. For example, someone with a bias against tattoos may be uncomfortable sitting on the metro next to a young man with multiple tattoos. The person is pre-judging the man with tattoos based on the group members rather than getting to know the man as an individual. Like stereotypes, prejudice can be positive or negative.

Discrimination does occur when a person is biased against an individual because of the individual’s membership in a specific category. For instance, if one were to learn that a person has gone to rehabilitation for alcohol treatment, it may be unfair to treat one as untrustworthy. We do hold a stereotype that people who have been involved with drugs are not trustworthy and we do not mingle with them as they have an arrest record.

Discrimination would come when one acts on that stereotype, for example, refusing to hire the person for a job for which they are otherwise qualified. Understanding the possible psychological mechanisms of problems like prejudice can be the first step in solving them.

Conflict is a perceived incompatibility of ideas, actions, beliefs, or goals. This is when we see one person harm the other because their interests are more important than the others. However, reconciliation can happen when people are willing to understand other’s points of view, their needs, and priorities.

Social psychologists are interested in the mental processes associated with conflict and reconciliation. They want to understand how the emotions, thoughts, and sense of identity do play into conflicts, as well as making up afterward. They study conflict, aggression, and violence, which leads their research towards many real-world applications in the areas of international relations plus clinical therapy.

Attitudes provide a better understanding of these forces which might help researchers, therapists, and policymakers intervene effectively towards conflicts.

Take a moment and think about television commercials. How influenced is one by the ads viewed? It is an uneasy thought that the outside influences might sway us to spend money on, make decisions about, or even feel what they intend us to feel. Nevertheless, none of us can escape social influence.

The way we see other people plays a powerful role on our actions and decisions. Also, people around us can shape our thoughts, feelings, moods, attitudes, perceptions, decisions, and actions we take. 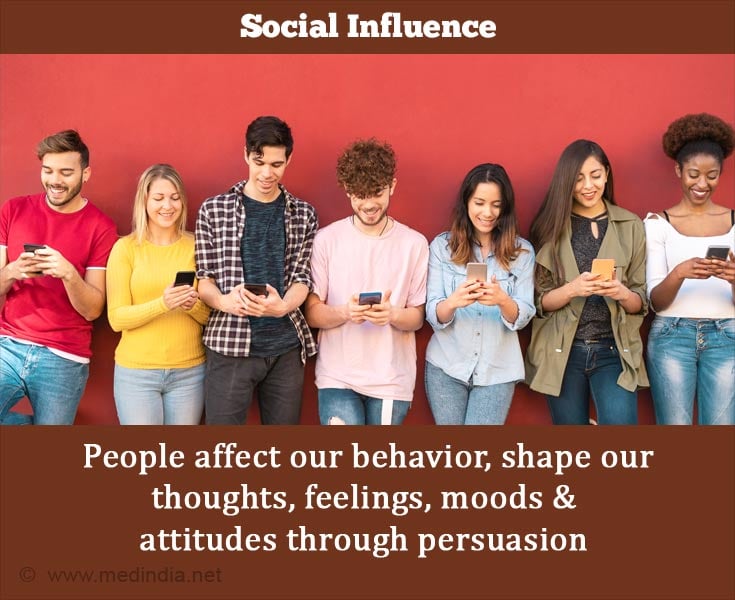 Social influence forms the heart and soul of social psychology. People affect our behavior; they tend to persuade to give up our own opinions and go along with the group and obedience to follow orders from people in authority.

Research on persuasion is very useful. It is tempting to dismiss it as an attempt by advertisers to get one to purchase the goods and services, persuasion is used for many purposes.

All of us spend so much time thinking about other people. We make assumptions about their honesty, motives and opinions. Social cognition is the term for the way we think about the social world and how we then perceive and observe others.

In some sense, we continually tell a story in our own minds about the people that are around us. We do struggle in understanding why a date failed to show up, whether we can rely on the notes of a fellow student, or if our friends are laughing at our jokes because we are funny or maybe they are just being nice to us.

The educated keep making guesses about the efforts or motives of others and this is called social attribution. We are “attributing” their behavior towards a specific cause. For example, we do attribute right from the failure of a date to arrive on time to car trouble, leading towards forgetfulness, or the wrong-headed possibility that we are not notable of being loved.

The information we have regarding other people’s motives and behaviour is not as complete as our insights into our own, we are likely to make unreliable and unjustified judgments of them. The consistent way we attribute and assign people’s actions towards personality traits while overlooking situational influences is called the ‘fundamental attribution error.’

The fundamental attribution error does emerge in other ways. It includes groups we belong to versus the opposing groups. The mental process allows a person to maintain his or her own high self-esteem while dismissing the bad behavior of others.

People are way more connected to one another today than at any time seen in history. In fact, it is so easy to have thousands of acquaintances on social media now. It is so much easier to travel and meet people from different cultures. Businesses, schools, religious groups, political parties, and governments so interact and engage more than they ever have.

For the first time, people in greater numbers do live clustered in cities than are spread across rural settings. These changes do have psychological consequences. Consider in the last hundred years, we have seen drastic shifts in political engagement, ethnic relations, and even in the very definition of family itself.

Social psychologists are the scientists interested in understanding the ways in which we do relate to one another, and the impact these relationships do have on us, individually plus collectively. Not only can social psychology research lead towards a better understanding of personal relationships, but it can lead to practical solutions for many social skills too. Lawmakers, teachers and parents, therapists, and even policymakers can use science to develop societies with less conflict and more social support.

“Social Psychology is especially interested in the effect which the social group has in the determination of the experience and conduct of the individual member.” – Gerard H. Mead