Anaemia is a common comorbidity in heart failure (HF) and is strongly associated with disease severity, prognosis and mortality.1 The pathophysiology behind the high prevalence of anaemia in HF, and its association with adverse outcomes, is complex and multi-factorial.2 Some of the key factors involved include renal impairment, chronic inflammation, medications and haematinic deficiency, in particular iron deficiency (ID).3

ID is typically defined as a serum ferritin level <30 µg/L and transferrin saturation <20%.4 ID has better predictive value in identifying risk of long-term unfavourable outcomes in patients with chronic HF than anaemia alone.5 ID is a common finding in HF even in the absence of anaemia,5,6 and is associated with reduced aerobic performance and poor exercise tolerance.7 In a study by Klip et al., half of the cohort of 1,506 patients with HF were found to be iron deficient, and of those nearly half (n=753, 45.3%) had haemoglobin (Hb) levels within the normal range.5

Iron is a crucial component in oxygen transportation and metabolism and plays an essential role in haematopoiesis and in mitochondrial energy production from oxygen utilisation in non-haematopoietic tissues. As a result, energy output can be affected by the presence of ID even in the absence of anaemia. The major causes of ID include inadequate dietary intake, reduced intestinal absorption and blood loss, but functional ID can manifest in chronic conditions such as chronic HF, chronic kidney disease (CKD) and malignancies due to increased iron sequestration in the reticuloendothelial system (RES).9

The mechanisms by which ID affects the natural course of HF remain elusive and unclear, but hepcidin is theorised as a possible causative factor.10 Hepcidin, a peptide protein synthesised and secreted by the liver, is considered a major regulator of iron metabolism. It inhibits the transport of iron by binding to ferroportin on the basolateral surface of the enterocytes and the cell membrane of the reticuloendothelial cells. This results in iron sequestration within the cells, thus preventing iron from entering the hepatic portal system. Hepatic up-regulation of hepcidin is thought to play a central role in the pathogenesis of ID in anaemia of chronic disease (ACD).11 In more advanced stages of HF, the overall decline in peripheral metabolism can ultimately result in a fall in hepcidin levels, a situation linked to more unfavourable outcomes.10

It has also been hypothesised that the increased levels of catecholamines and aldosterone in HF down-regulate myocardial mRNA expression of type 1 transferrin receptor (Tfr1), which is important for cellular iron transport across the cardiac myocytes.12 Electromechanically compromised cardiac myocytes could, therefore, contribute towards HF exacerbations and increased morbidity. In the event of clinically significant anaemia secondary to ID, the loss of red blood cell mass can result in plasma volume expansion due to the fluid shift, thus worsening the congestion in HF.13

In the context of high prevalence of ID, the effect of iron therapy in patients with ID and HF has been assessed in a number of clinical studies.

The first study, the FAIR-HF (Ferinject assessment in patients with IRon deficiency and chronic Heart Failure) trial published in 2009, showed that in patients with chronic HF, correction of ID with intravenous ferric carboxymaltose (FCM) resulted in improved symptoms and overall functional capacity compared with placebo.14 A substudy of the same trial by Comin-Colet et al. showed that iron supplementation improved quality of life (QoL) as measured by the Kansas City Cardiomyopathy Questionnaire (KCCQ).15 The dosing of ferric carboxymaltose in FAIR-HF was still based on the Ganzoni formula and is not consistent with the current Summary of Product Characteristics.16

The findings from FAIR-HF were corroborated in 2015 by the placebo-controlled CONFIRM-HF (Ferric CarboxymaltOse evaluatioN on perFormance in patients with IRon deficiency in combination with chronic Heart Failure) trial wherein 304 patients with HF and ID (defined as ferritin <100 µg/L [or 100-299 µg/L with transferrin saturation <29%]), were studied over a period of 52 weeks. CONFIRM-HF used the current method of dosing for ferric carboxymaltose based on the simplified dose.16 Patients included had New York Heart Association (NYHA) class II or III symptoms, left ventricular ejection fraction (LVEF) ≤45%, elevated natriuretic peptides (brain natriuretic peptide [BNP] >100 pg/mL and/or N-terminal-pro-brain natriuretic peptide [NT-proBNP] >400 pg/mL) and haemoglobin of <15 g/dL. Intravenous iron therapy in the form of FCM significantly improved the six-minute walk test (6MWT) by 33 ± 11 metres (p=0.002), in addition to NYHA class, patient global assessment (PGA) and QoL scores over the one-year period of treatment. The benefits were seen in patients with or without anaemia.17 This treatment may be associated with reduced hospitalisation as revealed by a secondary end point analysis.17 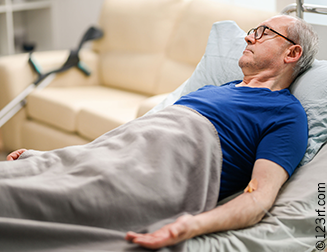 As evidenced above, there is sufficient reason and clinical need to screen patients with HF for anaemia and ID. In the context of fluid overload in HF, haemoglobin interpretation should be carried out together with the red blood cell mass and plasma volume to distinguish true anaemia from dilution-related anaemia.13 Mean corpuscular volume (MCV) is a useful parameter, as the value tends to decrease in advanced cases of anaemia secondary to ID.

Iron studies should be performed concurrently with a full blood count as routine screening tests in patients with HF. Serum iron by itself is not a reliable diagnostic marker, as it depends on the efficiency of iron recycling and fluctuates with dietary intake and diurnal variation. A low serum iron should be evaluated in conjunction with serum ferritin, which is the iron storage protein in circulation, and the transferrin saturation (TS), which is the ratio of serum iron to the total iron binding capacity (TIBC). In ID, the low serum iron and high TIBC give rise to a low TS. While hepcidin is considered a key regulator of iron metabolism, measurement of serum levels is not yet part of routine practice.18

The European Society of Cardiology (ESC) 2016 guidelines for the diagnosis and treatment of acute and chronic heart failure recognise the importance of the assessment of comorbidities to the holistic management approach in patients with HF. ID, with and without anaemia, and its management feature in the guideline given its prevalence and impact on patients’ condition.19

The guidelines’ recommendations are predominantly based on the findings of the FAIR-HF and CONFIRM-HF trials already highlighted. Neither trial was designed to evaluate the effect of FCM on mortality, or distinguish between the effects of FCM on anaemic and non-anaemic patients on pre-specified outcome measures. However, the studies, supported by a meta-analysis of intravenous (IV) iron therapy over 52 weeks by Jankowska et al. (2016),20 indicate that IV iron leads to sustainable improvement in patients’ symptoms, functional capacity and QoL, together with a reduction in HF hospitalisations.

As a result, the guidelines recommend that IV FCM should be considered in patients with HFrEF and ID as defined in FAIR-HF and CONFIRM-HF trials (class IIa recommendation, level of evidence A).19

The ESC guidelines highlight the lack of evidence supporting iron therapy in ID in the context of HFpEF/HFmrEF, and in patients with HF and ID over a long-term follow-up period.17,19,21

The 2016 Scottish Intercollegiate Guidelines Network (SIGN) guidelines for the management of chronic heart failure,22 recommend the use of FCM in the management of ID in HF. Supporting evidence is derived from the reports of two meta-analyses, FAIR-HF and CONFIRM-HF trials. FCM was associated with improved QoL, effort tolerance, reduced cardiovascular events and reduced HF hospitalisations.14,17,22-24

SIGN recommendations are more specific than the ESC, in terms of LVEF thresholds and symptom class, stating that in ID IV iron should be considered for patients with HFrEF, NYHA class III with an LVEF ≤45%, or NYHA class II with an LVEF ≤40%, who have a haemoglobin level of 9.5 to 13.5 and ID as defined in FAIR-HF trial.

The intricate relation and complex interaction between HF, renal disease and anaemia had been conceptualised in the cardiorenal-anaemia syndrome (CRAS) with suggestions to incorporate ID into the syndrome “cardiorenal–anaemia–iron deficiency syndrome (CRAIDS)” given its major role.25,26 The National Institute for Health and Care Excellence (NICE) guideline “Chronic kidney disease: managing anaemia” recommends testing for ID and monitoring of responsiveness to therapy and long-term requirements every three months in patients with anaemia of CKD not on dialysis. The first-line test, however, is percentage of hypochromic cells followed by reticulocyte haemoglobin content. When TS and ferritin levels are used ID is defined as TS <20% and ferritin <100 µg/L.27

Both the Renal Association28 and NICE27 recommend IV iron for iron replacement therapy for patients on haemodialysis. It must be mentioned that in HF with ID, oral iron therapy29 and erythropoietin are not recommended,19,22 and the latter may be associated with harm.30

When it comes to translating the aforementioned recommendations into practice, identifying appropriate patients is key. This is complicated by the number of definitions that exist to describe the severity of left ventricular systolic dysfunction (LVSD) based on LVEF. For patients with HF, the ESC uses an LVEF of <40% for the diagnosis of HFrEF with an EF between 40 and 45% falling under the HFmrEF category.19 Following ESC guidance could potentially lead to withholding iron therapy from symptomatic patients with HF and EF between 40% and 45% who could benefit from iron therapy according to clinical evidence.17 This is further complicated by the latest British Society of Echocardiography (BSE) guideline on normal reference values.31 In this guideline the LV is considered “severely impaired” when LVEF is <35%, “impaired” when it’s between 36 and 49%; again patients whom the evidence suggests may benefit from iron therapy fall under the two categories. Further, numerical assessment of LVEF is often challenging in clinical practice and is not presented in imaging reports, potentially leading some patients being denied evidence-based IV iron therapy.

Taking all of this into consideration, it would be appropriate to screen all patients with HFrEF for the presence of anaemia and ID. A diagnosis of ID can be made when serum ferritin <100 µg/L or between 100 and 299 µg/L if the transferrin saturation (TS) is <20%. It is important that ID is investigated to identify potentially treatable causes, e.g. gastrointestinal bleeding.19,32 Intravenous iron should be considered for patients with HFrEF, NYHA class III with an LVEF ≤45%, or NYHA class II with an LVEF ≤40%, who have a haemoglobin level of 9.5 to 13.5 and ID as defined above. Haemoglobin and iron levels should be monitored six weeks after initial repletion dose, and three monthly thereafter.27,33

The effects of long-term iron therapy on cardiovascular mortality and hospitalisation due to HF and on patients in NYHA IV will be evaluated in the ongoing IRONMAN study (ClinicalTrials.gov Identifier: NCT02642562) with iron isomaltoside 1000, which will follow patients for at least 2.5 years,34 and the FAIR-HF2 trial (ClinicalTrials.gov Identifier: NCT03036462) with ferric carboxymaltose,34 in which the follow-up is for a minimum of one year.

At least two trials will evaluate the effect of IV iron therapy in acute heart failure; AFFIRM-AHF (ClinicalTrials.gov Identifier: NCT02937454), a multi-centre, randomised-controlled trial (RCT), in which the effect of FCM, offered prior to discharge, on the composite end point of hospitalisations and mortality, evaluated over a one-year follow-up period, has just published.35,36 Another planned RCT will study the effect of IV sodium ferric gluconate on functional status over a 24-week follow-up period, and all-cause mortality and HF hospitalisations over a year’s follow-up, as a secondary outcome (ClinicalTrials.gov Identifier: NCT04063033).

The British Journal of Cardiology

The British Journal of Cardiology (The BJC) is a unique peer-reviewed publication linking primary and secondary care. It provides an important bridge for hospital doctors and primary care health professionals with an interest in cardiology to share knowledge. We aim to reflect the changing face of cardiovascular medical practice and provide readers with an ideal vehicle for continuing professional development (CPD) and all the elements needed to offer an enhanced service of care for patients.

Women face a 20% increased risk of developing heart failure or dying within five...