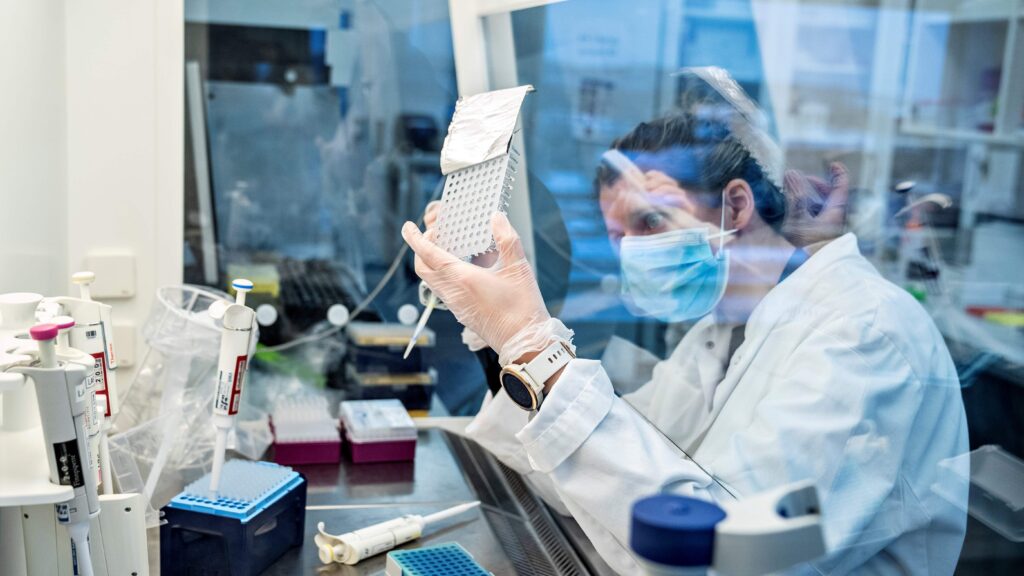 The Covid-19 virus is evolving rapidly.

That should come as no surprise: RNA-based viruses generate mutations constantly as a result of their error-prone replication. Wherever there are more infections, there are more opportunities for the virus to mutate. For a virus new to a species, as this coronavirus is to humans, some mutations are likely to make it more transmissible.

Important new coronavirus variants have emerged in the United Kingdom, Brazil, and South Africa. What is worrisome about these variants is that even though they evolved independently, they have some similarities. All share the N501Y mutation in the virus’s immunologically key spike protein. The strains in South African and Brazil also share the E484K mutation in the same protein, which some experiments suggest may at least partially evade the antibody response people generate after infection with older strains.

A newly emerging lineage called P.1 with multiple spike protein mutations was identified in 42% of samples tested in December from Manaus, Brazil. The largest city in the Amazon region is being severely hit by the Covid-19 pandemic for a second time: It experienced a similarly fierce first wave in April 2020, leading some to conclude that the population achieved close to herd immunity. That conclusion was wrong, and two possible explanations are that immunity either waned or does not fully protect against P.1.

Multiple scientific groups, including ours, have estimated that the so-called variant of concern in the U.K. (B.1.1.7) is more transmissible than previous coronavirus variants, with estimates varying between 40% and 80%. This likely explains the rapid growth in case numbers seen in Southern England and Ireland over the last two months of 2020. Recently, several groups have reported increased disease severity in people infected with the B.1.1.7 strain compared to those infected with previous strains.

How can policymakers respond to these new challenges? Being aware of them would be a good start. Only a handful of countries, such as the U.K. and Denmark, have large-scale systematic surveillance in place to sequence the genomes of a large enough sample of viruses to track the evolution and rise of new variants in real time. When potentially significant new variants are detected, any changes in transmission, severity, or immunity need to be characterized as quickly as possible.

As countries roll out mass immunization, changes affecting immune recognition will be particularly important to watch for to update vaccine formulation if needed. Fortunately, this pandemic has seen the pioneering of the new technology of mRNA vaccines, such as those produced by Moderna and Pfizer, which should be able to be updated much more easily than older vaccine technologies.

Maintaining control of more-transmissible coronavirus variants is the second challenge. As far as we can judge, B.1.1.7 is no different in how it spreads, it is just better at it in all settings. The same interventions that have been used throughout this pandemic — social distancing, mask wearing, and hand washing — work against the new strains, but their increased transmissibility means that these measures must be implemented more stringently to control the pandemic.

That’s why England went back into lockdown in early January and closed schools. The country is now anxiously studying daily numbers of new cases and hospitalizations to see signs that this third lockdown is working. The early evidence is encouraging: The reproductive number is estimated at between 0.8 and 1.0. Unfortunately, this has not yet translated into hospitalizations, as admissions to critical care have risen to unprecedented levels in many hospitals. The U.K. government is tightening enforcement of existing control measures.

Many countries — at least those high-income countries that have secured adequate supplies of Covid-19 vaccines — are placing their faith in vaccines as a way out of stop-and-start social distancing and lockdowns. The new variants pose additional challenges to this strategy. Even if vaccines are as effective against these new coronavirus variants as they are against older ones, which remains an open question, increased transmissibility means current control measures will need to be relaxed more cautiously than might otherwise have been possible.

And they make achieving high vaccination coverage as rapidly as possible even more critical than before, particularly in the most vulnerable groups. Even vaccinating 80% of individuals over 60 years of age would still leave 20% of the highest-risk age groups unprotected.

Given that the pandemic has so far infected only about 20% of the elderly in the U.S., releasing other control measures and allowing transmission to accelerate in younger age groups would risk causing as many deaths as have been seen so far. It is also unlikely to reduce the pressure on critical care units: Half of patients in U.K. intensive care units are under 61 years of age. Vaccinating older age groups is not going to translate into big reductions in critical care admissions.

Avoiding deaths and critical care admissions will require vaccination strategies to switch their targets from protecting the most clinically vulnerable groups to a strategy that aims at reducing transmission. Such a strategy will generate at least a degree of herd immunity by vaccinating those most likely to transmit the virus: young and middle-aged people, though the effectiveness of this strategy remains to be proven.

What might late 2021 look like? We hope that countries with sufficient vaccine supply will vaccinate a large majority of their adult population, which will prove highly effective, at least at protecting against severe Covid-19.

Yet the U.S., U.K., and other governments worldwide need to prepare for the realistic scenario that some vaccines will only offer partial protection, especially in light of the new virus variants, and that some level of control measures will need to stay in place going into the winter of 2022.

To stay a step ahead of Covid-19, countries need to invest in robust genetic surveillance systems and increase their capabilities to identify coronavirus variants as they arise, and vaccine deployment needs to continue at the same pace or accelerate to safeguard vaccine efficacy as new variants emerge.

The outlook is less optimistic for low- and middle-income countries.

In a globalized world with the risk of virus mutation increased by high levels of infection, no country is protected until all countries are protected. Countries around the globe will need to unite and establish effective governance to combat the global threat from SARS-CoV-2 and its variants.

Researchers at Caltech have developed a low-cost multiplex test that can rapidly...