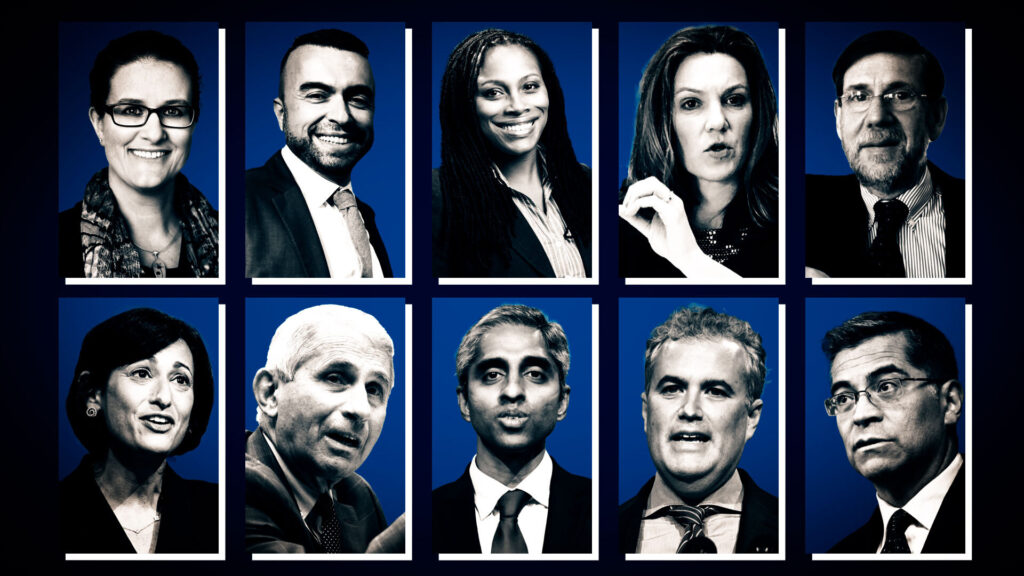 WASHINGTON — President Biden has promised to listen to the experts on Covid-19, but their messages may be hard to hear if too many are talking at once.

Already, Biden has tasked dozens of scientists, administrators, and policymakers with reining in a raging pandemic. As the Biden transition segues from planning to governing, those individuals will have to coalesce into a cohesive unit for them to enjoy the success the new president has promised.

Irwin Redlener, a Columbia University professor and pandemic-response expert, said he thinks highly competent individuals have been chosen for each position, but hasn’t yet seen how the various responsibilities of the Covid-19 task force and existing agency positions will fit together.

“They have an orchestra of talented musicians, but without a conductor the outcome is not going to be what we are expecting,” Redlener said.

As the influence begins to consolidate, STAT singles out the 10 officials worth watching closest. And the public may be seeing more of these figures soon — Press Secretary Jen Psaki said Wednesday that the administration plans to hold regular briefings with health officials on the pandemic.

In one of his very first actions as president, Biden elevated former Obama administration economist Jeffrey Zients to an entirely new position of Covid-19 coordinator.

Zients doesn’t have public health experience, but touts a reputation as a problem solver. He was called in to fix the disastrous rollout of the Affordable Care Act’s federal health insurance marketplace website, and as Biden’s Covid-19 czar, his foremost task will be fixing the failed rollout of the two existing coronavirus vaccines. He’s the most obvious ringleader of the overall pandemic response effort, but managing personnel and coordinating a whole-of-government response like the one Biden envisions will be a daunting task.

As HHS secretary, Xavier Becerra will have authority that the Covid-19 task force lacks to allocate resources and issue regulations. Becerra is another top official who lacks public health experience — he is an attorney like his predecessor, and spent more than two decades in Congress.

Becerra made a national name for himself in the health policy world as the face of the lawsuit that Democratic-led states and lawmakers filed to defend the Affordable Care Act from the challenge by GOP-led states. The tools at his disposal will be different in an administrative role — more proactive than reactionary.

He doesn’t have the public health chops of others Biden has singled out, but Becerra is known as humble and largely uninterested in the spotlight. It will be up to him to decide who he relies on to guide his massive agency’s pandemic priorities. His chief of staff Sean McCluskie, whose appointment STAT first reported, is a longtime aide who followed him from the halls of the Capitol to the California attorney general’s office.

Becerra’s nomination isn’t in the first round making its way through the Senate confirmation process, but now that Democrats have control of the upper chamber, it’s likely he will be installed quickly and will play a key role in Biden’s early days.

Former FDA Commissioner David Kessler hadn’t served in government for more than 20 years before he joined the Biden team, but he has already racked up an impressive Biden world resume. He served as a co-chair of the transition’s Covid-19 task force and as chief medical adviser for the inauguration, and Biden tapped him to lead the new iteration of Operation Warp Speed. It’s not a position with policymaking authority, but he will be a liaison between the administration and companies offering to help with the vaccine development effort.

While much of the immediate focus is on ensuring shots reach people’s arms, Kessler will be working on forward-looking issues, too, including vaccine development, manufacturing, distribution and ensuring safety. Kessler has a reputation of lacking interpersonal skills, but he has Biden’s ear, the person who matters most.

Anthony Fauci, long a trusted public health figure, was catapulted to stardom by the Covid-19 pandemic. Biden promised during the presidential campaign to keep Fauci on board, bestowing on him the formal title of chief medical adviser. But that doesn’t encapsulate the extent of his influence; Biden, for example, has already tapped Fauci to lead the national delegation to the World Health Organization’s annual meeting.

Fauci has a foundation with Biden, as he worked with with the former vice president during the Obama administration’s West African Ebola crisis. Fauci is media savvy and unafraid to speak his mind, so he will be both a prominent internal voice and an important public figure for the Biden administration.

Centers for Disease Control and Prevention Director Rochelle Walensky is an excellent communicator with firsthand experience fighting Covid-19 as the head of infectious diseases at Massachusetts General Hospital. One example of her ability to drive a news cycle was her outspoken criticism of the Trump administration’s rocky distribution of the Covid-19 drug remdesivir to hospitals and health systems across the country.

The CDC director position isn’t Senate-confirmed, so she has already started in her position. Her new agency was sidelined and faced political attacks during the Trump administration’s tenure, so Walensky will have her hands full rehabilitating morale and the CDC’s public image. She may also have a role in data collection and transparency around the administration’s Covid-19 priorities.

Health equity expert Marcella Nunez-Smith had a prominent perch as a co-chair of the Biden transition’s Covid-19 task force, where she was at the decision-making table setting priorities for Biden’s first days. She also brings a unique focus on addressing the pandemic’s impact on Black, Latino and Native American communities. As one of Biden’s priorities outside of health care is promoting racial justice, Nunez-Smith will find herself at the intersection of two urgent objectives.

Her role’s existence is groundbreaking in itself, but loosely defined so far. Nunez-Smith will report directly to Zients and will help oversee pandemic response efforts at federal agencies. Communities of color have experienced higher rates of serious illness and death from Covid-19, and equity will be an important consideration as the administration scrambles to meet its targets.

During the Democratic National Convention, Biden gave Vivek Murthy a prime-time platform to introduce himself to the American public. He will reprise his role as U.S. surgeon general for the new administration, following a three-year stint in the job under former President Obama. The role will empower him to begin the work of repairing public health’s image, which has been battered over the course of the pandemic.

Murthy will face daunting Covid-19 messaging battles. While the United States is currently facing more demand for vaccines than are available, eventually the administration will have to combat vaccine hesitancy to reach herd immunity thresholds.

Unlike Becerra, Biden’s nominee for the second-in-command position at HHS, Andrea Palm, is a seasoned agency veteran. She formerly served as a chief of staff and senior counselor in the Obama HHS, and at the White House Domestic Policy Council during the implementation of the Affordable Care Act. She also has experience running a major state health agency in Wisconsin, experience that critics say Becerra lacks.

Her policy chops position her to be an influential counterpart to Becerra, and she has direct experience with managing an agency during Covid-19 and wrangling with the Trump administration’s haphazard vaccine rollout.

While many officials will have responsibility and incentive to help Biden achieve his goal of administering 100 million vaccines in his first 100 days in office, Bechara Choucair will uniquely bear that burden as Biden’s vaccination coordinator. Choucair is a family physician who most recently served as an executive at Kaiser Permanente.

Choucair will be tasked with working with state and local health officials to ensure the smooth delivery of vaccines. Federal funding has been trickling down to states from a pool of new funding Congress authorized in December. State and local officials set their own vaccine distribution guidelines, and some have begun complaining about supposed supply shortages.

On the campaign trail, Biden attacked former President Trump for disbanding a White House biodefense council created during the Obama presidency. Biden resurrected the council Wednesday and chose Beth Cameron to lead it. As the office doesn’t currently have a role in the pandemic response, Cameron will have latitude to carve out the National Security Council directorate’s responsibilities and role for the future.

Middle-income countries have gained greater access to a variety of needed ...