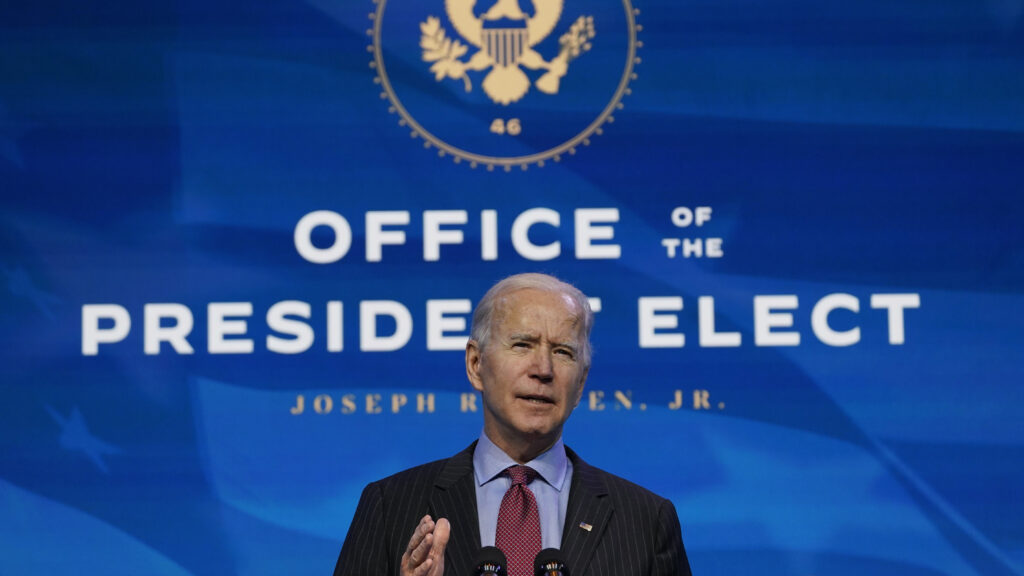 WASHINGTON — President-elect Biden called on Congress to approve $415 billion in emergency spending to scale up vaccinations, testing, contact tracing, genomic sequencing, and other efforts to fight Covid-19 — a major part of a broader, $1.9 trillion stimulus proposal.

“The vaccine rollout in the United States has been a dismal failure thus far. …. We’ll have to move heaven and earth to get more people vaccinated, to create more places for them to get vaccinated, to mobilize more medical teams to get shots in people’s arms, to increase vaccine supply to get it out the door as fast as possible,” Biden said. “But we need about 400 billion in funding from Congress to make all of what I just said happen.”

Biden also expressed confidence that the country would meet his goal of administering 100 million vaccine shots in his first 100 days in office. In a call with reporters Thursday afternoon, senior Biden advisers also said state and local governments could scale up testing and vaccination programs almost immediately after the additional funds were allocated — but stressed that Congress must move quickly to avoid further illness, death, and economic devastation.

The proposal, however, was light on specifics. The aides pledged, for instance, to invest in new Covid-19 treatments, but provided little detail. Biden also plans to unveil the specifics of his vaccination plan on Friday, aides said. It’s unclear how that announcement will differ from the Thursday funding request, and how much additional detail the president-elect will offer.

The funding request also highlighted the need to scale up the country’s genomic sequencing efforts, in light of new, highly transmissible variants of the SARS-CoV-2 virus detected around the world and, now, in the United States. It provided no specifics about how much money the administration would request or what that program would entail. STAT reported on Wednesday that Biden’s pandemic advisers convened an emergency meeting on Dec. 24 to discuss a variant first found in the United Kingdom known as B.1.1.7, and that the new variants had figured into planning for vaccine distribution, genomic sequencing, and new restrictions for travelers entering the country at international airports.

Biden’s legislative proposal will also include funding for 100,000 public health workers to address staffing shortfalls at hospitals, clinics, and local health departments. It will include $10 billion to “expand domestic manufacturing for pandemic supplies.” And it would provide funding for states to create “strike teams” they could deploy to nursing homes and assisted living facilities experiencing Covid-19 outbreaks.

Biden hopes to pass the first phase of his plan through the regular legislative process with bipartisan support, but that will be a heavy lift in a narrowly divided Congress. The plan also includes provisions such as raising the minimum wage, which could jeopardize GOP support.

A mid-March deadline related to unemployment insurance could motivate Congress to act relatively quickly. A Biden transition official said the package needs to move “as quickly as we possibly can.”

However, it took lawmakers seven months to agree on their most recent stimulus deal, and local health officials fear a repeat performance.

“What was put into the first bill was a down payment,” said Adriane Casalotti, the chief of public and government affairs for the National Association of County and City Health Officials. “No help has gotten here yet, and we can’t have a situation like last year where we [were] waiting since spring for funding for a key part of the pandemic response.”

Public health groups and the National Governors Association haven’t staked out specific price tags for their vaccine distribution needs. State and local public health groups said it’s hard to figure out how much they need because they still haven’t fully received their share of the $9 billion lawmakers included in their last stimulus bill, passed more than four weeks ago. Depending on state guidelines, some are soon facing a major expansion of the number of people eligible for vaccination.

The CDC did not respond to a request for comment on how much money would ultimately be sent to states or a timeline for the distribution.

Opinion: STAT+: Developers of microbiome-based drugs face challenges. There are ways to overcome them

The promise of microbiome-based therapies has been hindered by significant ...