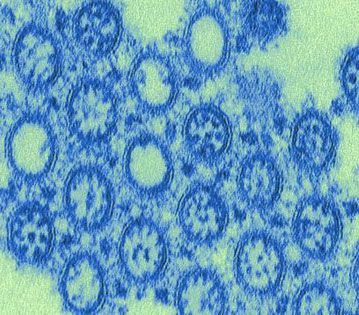 Ongoing instances of H1N1 influenza A virus (Swine Flu) transmission to or between humans in China prompted an open comparative study of the effectiveness of the antivirals oseltamivir and zanamivir in acute treatment, as well as an assessment of a new mathematical model to predict regional spread of the contagion.

The investigators indicate that H1N1 influenza that is detected early can be “easy to treat and has a high cure rate,” but severe symptoms can develop, and these patients present a treatment challenge.

“H1N1 flu (can have) various complications such as respiratory failure, septic shock and multiple organ dysfunction, which has a poor prognosis and a high mortality rate, generally between 12-18%,” Wang and colleagues observe.

The investigators randomly assigned the patients to receive either oseltamivir or zanamivir. The two groups were comparable in demographics, baseline body temperature, and presenting symptoms. Most common presenting complaints were nasal congestion, sneezing and/or rhinorrhea; and other common symptoms included palpitation, headache, thirst and fatigue. Gastrointestinal symptom were less common, occurring in less than one-third of patients.

In some patients, although their number was not specified in the report, CT image of lungs showed bilateral ground glass shadow with diffuse consolidation, and rough bronchial texture with air retention. Lesions in the lungs, described as “sheets or fans,” were more often distributed in the periphery of the lungs than in central areas.

In addition to remediative and supportive treatment during hospitalization, patients began a 10 day regimen of either oseltamivir 75mg orally twice daily or zanamivir 300mg intravenously twice daily on admission. Patients were followed for 7 days after those treatment regimens to document temperature, symptoms, adverse treatment events and clinical outcome.

Wang and colleagues reported that the time to abatement of fever was similar between the groups.Symptom severity, on an unspecified measure, was statistically significantly lower in the oseltamivir group in the period of 4 to 7 days after the treatment regimen.In addition, the rate of recovery in that period was statistically significantly higher with oseltamivir (7.38%) than in those receiving zanamivir (4.93%).

Wang and colleagues also reported on developing and testing a mathematical model to predict H1N1 transmission. They describe an Autoregressive Integrated Moving Average Mathematical Model Analysis (ARIMA) of epidemiology based on H1N1 hospitalization and geographical distribution data from 2010 to 2018.

The model predictions for 2019 coincided well with actual case reports in February through May, July and August, and October through December.There was more variance in January, June and September.

In considering some of the model parameters in their patient cohort, Wang and colleagues note that overall, 60% had a history of exposure to another patient with H1N1 and 25.9% had close contact history.

“Compared with zanamivir, oseltamivir has a better rate of clearance time for treating fever and a better improvement for curing flu symptoms,” Wang and colleagues concluded. They also characterize the ARIMA mathematical model as having potential, but indicate that it “still can be optimized and improved further.”

The study, “Oseltamivir in the Treatment of Severe Type-A H1N1 Flu and Autoregressive Integrated Moving Average Mathematical Model Analysis of Epidemiology,” was published online in Results in Physics.

FDA Authorizes First COVID-19 Vaccine in the US, Begins Distribution

An original version of this article was published to sister publication ...