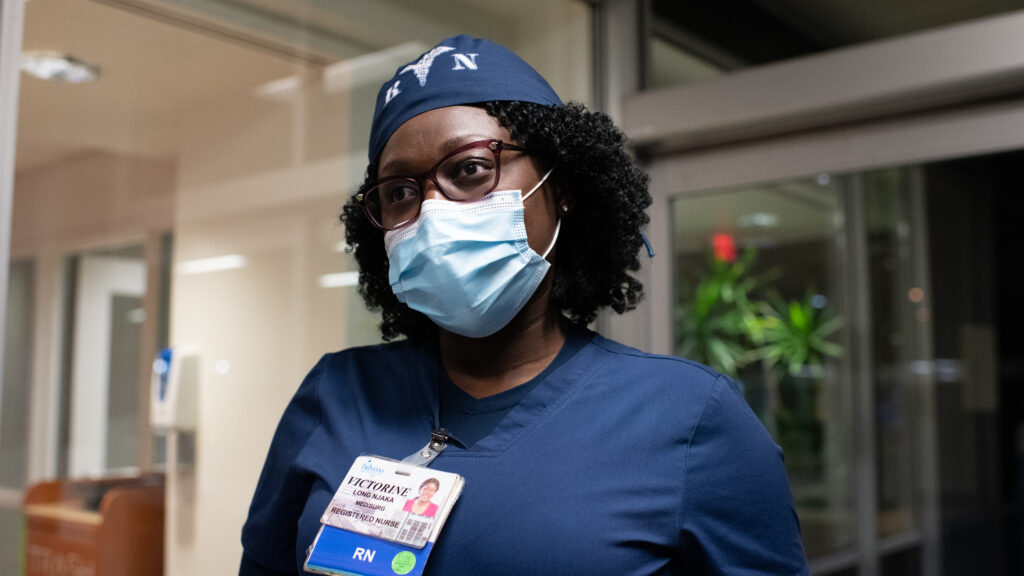 The first round of treating Covid-19 patients in New Jersey was brutal. Victorine Long Njaka, a nurse at Trinitas Regional Medical Center in Elizabeth, can’t shake the memory of a 34-year-old patient from last spring. He could barely breathe, and was so weakened by the virus, he seemed to have lost his will to live.

Long Njaka, 37, couldn’t bear more deaths of people her age. Her brain was overloaded with the constant calls over the hospital intercom for coronavirus patients in respiratory or cardiac arrest — “Code Blue 19” — and with all the bodies she had escorted to the morgue.

Night after night, she and other nurses tried to calm his new wife, six months pregnant with their first child, on FaceTime. But she feared they were losing him.

On her next shift, she strode into her patient’s room. “Look at me,” she said. “I don’t know how it feels to have Covid, but you have to fight for your wife and baby. You are only 34.”

“I was talking to him like he was my brother, constantly reminding him to keep fighting,” Long Njaka told STAT. ” And do you know what? That man made it home.”

The initial wave in New Jersey crested in late April, and life in the hospital slowly returned to a semblance of normalcy. But now Long Njaka — and thousands of health care workers in New Jersey — are bracing themselves to do it all again. The positivity rate in Newark, the state’s largest city, has hit 30% in some neighborhoods, and Mayor Ras Baraka is begging residents to stay at home for the 10-day period beginning on the day before Thanksgiving.

“It’s coming back, and all we can do is put on our masks, use our face shields, treat everyone like they have Covid, and sanitize, sanitize, sanitize,” Long Njaka said. “I believe God made me a nurse. I care about my patients and I am here to take care of them. So that is what I will do.”

Doctors and nurses say that they feel better prepared to deal with the coronavirus than in the spring, when so little was known about it. Because it was hit so hard in the first wave, New Jersey’s per capita death rate remains the highest in the country.

But the recent numbers are discouraging. On Sunday, the state reported 3,968 new cases of the coronavirus, more than double the 1,743 new cases reported on Nov. 1. And the state’s hospitalization rates have tripled in the past month, from 732 on Oct. 17 to 2,446 on Nov. 17. While they are far short of the 8,000 who were hospitalized in April, as the days shorten, the temperature drops, flu season deepens, and the holidays loom, many depleted frontline workers are preparing for another season of difficulty.

“Each week, cases are higher than the week prior, and you can look and see what’s coming,” said Erin Muckey, assistant professor of emergency medicine at Rutgers New Jersey Medical School and medical director of the emergency department at University Hospital in Newark.

“I believe God made me a nurse. I care about my patients and I am here to take care of them. So that is what I will do.”

Last spring, traveling nurses and doctors, eager to help in the overflowing hospitals, poured into New Jersey and New York from all parts of the country. But with the virus now surging nationwide, New Jersey hospitals must draw on their own resources of emotionally drained staff.

And while at least two promising vaccines offer hope, they are are weeks, if not months, away from wide distribution, though frontline health workers could start being inoculated in December.

“This time around, there’s a bit of apprehension and trepidation that’s different from last time,” said Muckey, 34. “In the spring, we had a fear of the unknown because we were on this ride and didn’t know what was going to happen next. We didn’t have the medicine. Now we have a little bit more knowledge, and the hope of a future vaccine.” She paused. “But for patients who are sick right now, that’s too late.”

Still, John D’Angelo, chair of emergency medicine at Trinitas, told STAT he saw positive signs. Eight months into the pandemic, doctors and nurses feel better prepared to cope with its effects: Medicine has developed therapeutics, including the steroid dexamethasone, monoclonal antibodies, and remdesivir — that appear to help shorten the duration and severity of the illness in some people.

“It’s easy to feel fatigued when you’re seeing it again, but we’ve learned a lot of lessons,” said D’Angelo, 46. “We’ve gotten better at treating our patients, and we’re not seeing a crush of people who need ventilators. We’re checking inflammatory markers and can prevent the microemboli that cause strokes and heart attacks.”

At Newark Beth Israel Medical Center, many staff members were sickened by the virus last spring. While most recovered and feel that their antibodies offer them some protection, others fear reinfection, or experience symptoms of PTSD just glimpsing in the rooms where they themselves were treated. Many feel anxious to see the reappearance in hallways of the yellow caddies that hold gloves, PPE, and other equipment needed to care for Covid-19 patients.

“I’ve been in nursing for 32 years, and this is the first time I’ve seen the staff in crisis mode for so long,” said Amy Doran, the hospital’s chief nursing officer, who was one of those infected in the spring. “It is emotionally and mentally exhausting to be facing the same situation we faced in early March.”

So have cultural and organizational shifts that have made each staff member feel valued, said Doran, 55.

That grew out of necessity last spring, when all staff members were called upon to help care for patients in the hospital’s overflowing Covid-19 wards. For example, the task of proning patients — turning them from their backs to their abdomens in order to increase the distribution of oxygen in the lungs — often required many careful hands. Typically, such a job would be performed by nurses, Doran said. But the acute needs of patients required the help of anyone who could pitch in, including doctors and residents.

“I’ve been in nursing for 32 years, and this is the first time I’ve seen the staff in crisis mode for so long.”

As a result, hospital officials helped design a new pod structure that feels more like a team than the traditional hospital hierarchy with physicians at the top. And there is another, more visible leveling: Everyone now wears identical green scrubs.

Prior to the pandemic, doctors and administrators would enter the floor in business clothes, while nurses, orderlies, and other hospital workers wore scrubs.

“When you think of sports teams, everyone is in the same uniform,” Budinick, 50, told STAT. “With everyone in the same green scrubs, it sets a tone. It’s a lot easier to think of yourselves as being on the same team. It’s had an equalizing effect.”

D’Angelo said he believes the experiences Trinitas hospital staff have endured since March have brought his staff together, too.

“I pray we don’t miss this moment to slow down and realize what we’ve done. There’s been so much oneness with all staff members,” he said. “As paradoxical as it might seem, there’s been a lot of togetherness in the suffering. And in the hospital, there’s been a leveling of importance. It’s been beautiful to see. What each person does matters. It doesn’t matter what your title is.”

Indeed, many frontline workers are focusing on hope — from science; from more cohesive public health messaging they hope to receive from a new administration; and from the differences they are able to make in the lives of their patients.

Some, like Yvelande Etienne, a nurse at Newark’s University Hospital, is reassured by the volume of patients she sees going home, and by the small progress she helps them achieve by blowing into incentive spirometers, small devices that help open airspace in the lungs. “I’m happy I can make a difference during this difficult time,” said Etienne, 36.

Others, like Civil Nya, a nurse at Trinitas, are drawing on their own personal experience.

Sickened with the virus in early spring, Nya, 49, has recovered fully, and, with ample antibodies, works nights on the Covid floor. But when he lay in the ICU in April, the first time he was ever hospitalized, his mind raced with fear he would never see his wife and four children again. He could think only of his parents, who both died many years ago after being hospitalized for the first time in their lives.

“They went to the hospital and never made it out,” he told STAT. “It was not so much the disease I was afraid of — it was the way my parents left the earth. I thought I would be the third member of my family to die that way.”

Now, he summons his own resilience to comfort his sickest patients. “In the lowest moment of a patient’s life, when no family member can sit and hold their loved one’s hand, it is hurtful and upsetting. But I am able to do that. I pull up a chair with all my PPE on, my face shield on, and I sit there, even if it’s just for two minutes. I say, ‘I have been in that bed, in your same position. Keep fighting. You’re going to win this. Keep fighting. You will get better.’”

Each patient’s nightstand is equipped with an Alexa device that allows nurses to communicate directly from the nurse’s station. Many patients, struggling to breathe and fighting high fevers, use it to play music.

And so from behind his face shield, from beneath his navy blue PPE, Nya often dances into the room. His patients are unanimously amused.

“I cannot measure what they are feeling at that moment,” Nya said, “but even little smiles bring us all encouragement.”

Researchers at Aalto University in Finland have developed an ultrasonically ...