During the COVID‐19 pandemic, plastic surgeons enhanced their safety protocols. They re‐evaluated their aesthetic practices to ensure optimal patient safety, especially elective procedures using energy‐based devices and lasers. Previous studies have shown that the plume emitted by these devices contain tissue debris and aerosolized biological materials that could transmit viruses and bacteria. 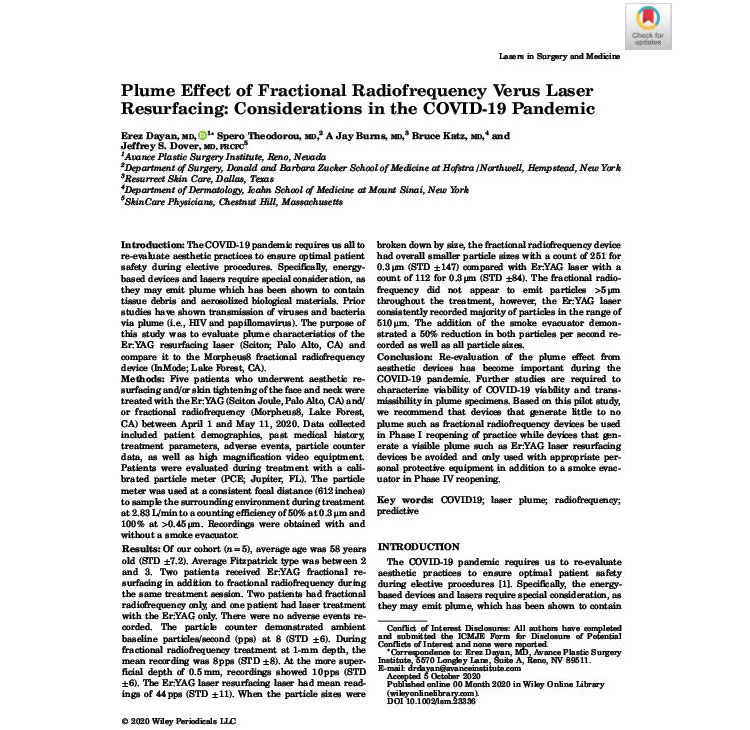 A study “Plume Effect of Fractional Radiofrequency Versus Laser Resurfacing: Considerations in the COVID‐19 Pandemic” recommends that plastic surgeons should use devices that generate little to no plume, such as radiofrequency devices, to minimize the risk of laser plume‐associated pathogen transmission during the reopening of practices in Phase 1. The study by bodySCULPT plastic surgeon Spero J. Theodorou, MD et al, was published in Lasers in Surgery and Medicine on November 8, 2020. The study also suggests that it is best to avoid treatment with Er:YAG laser resurfacing devices, and if used, these should only be “used with appropriate personal protective equipment in addition to a smoke evacuator in Phase IV reopening.”

The study data demonstrated that the:

Through this study, researchers were able to provide guidance to practitioners on the potential for viral transmission by comparing the plume generated by RF-based microneedling and Er:YAG fractional skin resurfacing. According to the study, “the U.S. Occupational Safety and Health Administration (OSHA) currently has no regulatory requirements for protection against plume emission from energy‐based devices and lasers devices. However, several professional societies, including the American Society for Lasers in Medicine and Surgery (ASLMS) have recommended guidelines to protect patients and practitioners”.

The researchers concluded that though the study shows the necessity of using PPE such as masks, eye protection, and smoke evacuation systems with Er: YAG, further studies are required to characterize the viability of COVID-19 and its transmissibility via plume specimens.

Study author Dr Spero J. Theodorou is bodySCULPT® plastic surgeon and InMode’s Chief Medical Officer. Dr Theodorou has extensive training in radiofrequency-assisted and other power-assisted liposuction procedures. He is responsible for the development of all of InMode’s procedures, clinical studies and training. Dr Theodorou was instrumental in the development and introduction of EmbraceRF, the innovative facial contouring solution, that blends InMode’s FaceTite and Morpheus8.

bodySCULPT® has been established as an advanced plastic and cosmetic surgery center at the exclusive Upper East Side Manhattan, Eye, Ear and Throat Hospital. bodySCULPT® is AAAASF-accredited and is the only plastic surgery group in NYC to focus exclusively on body contouring, which makes us leaders in technology-based body contouring. Our practice in NYC, located on Central Park South in Manhattan, New York City (NYC), dedicates itself to maintaining the highest standard of care and offers you the best in plastic surgery procedures.

The initial launch of the RESONIC brand for tattoo and cellulite indications is ...