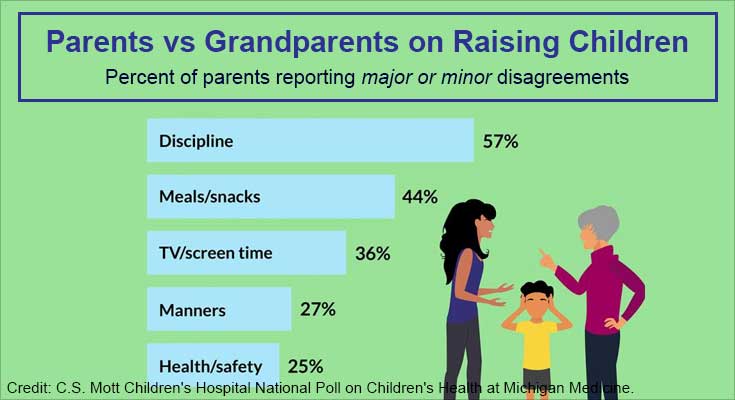 According to the national poll, nearly half of parents describe disagreements with one or more grandparent about their parenting. Sometimes, things can go as far as parents restricting the contact between children and their grandparents, at least one in seven parents do so.

‘Grandparents, should be consistent with parenting choices by trying to understand and comply with parent requests. They should support parents in the difficult job of raising children and should try to avoid escalating the conflict to the point that they risk losing a special time with their grandchildren.’
Read More..


Other common areas of disagreements are over manners, safety and health, bedtime, treating some grandchildren differently than others and sharing photos or information on social media.

“Grandparents play a special role in children’s lives and can be an important resource for parents through support, advice, and babysitting. But they may have different ideas about the best way to raise the child, and that can cause tension,” says Mott Poll co-director Sarah Clark.

“If grandparents contradict or interfere with parenting choices, it can have a serious strain on the relationship,” Clark adds.

The survey is based on 2,016 responses from parents of children ages 18 and under.

The findings reveal that around 57% of the time, disputes between parents and grandparents are over disciplining. Choices over meals contribute to 44% of the difference in opinion, and 36% of the time there are disagreements over TV/screen time.

Inter-generational differences are the source of some disagreements. Some grandparents may feel that their way of parenting is the right way.

When grandparents compromise on child safety by refusing to put babies to sleep on their back or do not use a booster seat when driving grandchildren to preschool, it also results in major disagreements.

“Whether grandparents cooperated with a request or not was strongly linked to parents’ description of disagreements as major or minor,” Clark says. “The bigger the conflict, the less likely grandparents were to budge.”

When grandparents refuse to agree to such requests, parents are more likely to put limits on the amount of time their child spent with them.

“Parents who reported major disagreements with grandparents were also likely to feel that the conflicts had a negative impact on the relationship between the child and the grandparent,” Clark says.

“These findings indicate that grandparents should strive to understand and comply with parent requests to be more consistent with parenting choices – not only to support parents in the difficult job of raising children but to avoid escalating the conflict to the point that they risk losing special time with grandchildren.”

Top of the morning to you, and a fine one, it is. Once again, clear blue skies ...

A Phase 3 trial will evaluate the safety and efficacy of NVX-CoV2373, a vaccine ...