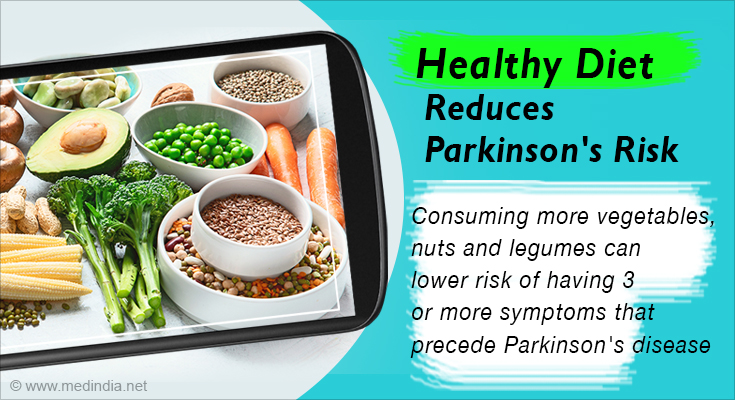 According to the new study, eating a healthy diet during middle age lowers the risk of having these preceding symptoms. The study is published in the online issue of

, the medical journal of the American Academy of Neurology.

‘Eating more vegetables, nuts, legumes, and not consuming red meat are associated with a lower risk of having three or more of the preceding symptoms of Parkinson’s disease. These preceding symptoms are those that generally appear ten years before the onset of movement symptoms.’
Read More..


“While this study does not show cause and effect, it certainly provides yet another reason for getting more vegetables, nuts and legumes in your diet,” said study author Samantha Molsberry, Ph.D., of Harvard University in Boston, Mass. “More research is needed to determine whether eating a healthy diet could delay or even prevent the development of Parkinson’s disease among people who have these preceding symptoms already.”

The study involved 47,679 people whose dietary intake was monitored every four years, starting in the 1980s when they were middle-aged.

Participants were divided into five groups based on how closely they followed their diet. They were tracked closely by researchers.

In 2012, people were checked for two common conditions of Parkinson’s disease, constipation and a sleep disorder called rapid-eye movement sleep behavior disorder, characterized by acting out dreams during sleep by movement, such as flailing arms or shouting or screaming.

In 2014-2015, 17,400 of the participants were asked about five more symptoms that can precede Parkinson’s disease, loss of sense of smell, impaired color vision, excessive daytime sleepiness, body pain and depression.

People who had the highest adherence to the diets were less likely to have three or more symptoms that precede Parkinson’s disease than the people with the lowest adherence.

People in the high group for adherence to the Mediterranean diet were 33% less likely to have three or more symptoms than those in the low adherence group. These results were adjusted for other factors that could affect the risk of developing these preceding symptoms, such as physical activity, smoking and body mass index (BMI).

A similar strong relationship among those following the Alternative Healthy Eating Index diet pattern and having three or more of these non-motor symptoms.

The study showed that eating more vegetables, nuts, legumes and consuming a moderate amount of alcohol were all associated with a lower risk of having three or more of the preceding symptoms. Moderate alcohol consumption meant one drink per day for women and no more than two drinks per day for men.

First of all, congratulations on making it this far in your journey towards ...

Exercise in the Morning to Prevent Cancer

Most studies on circadian disruption and cancer risk focused on night shift ...