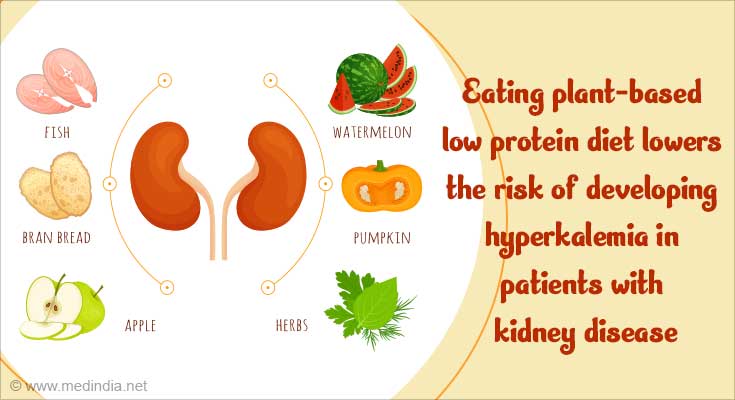 Chronic Kidney Disease is a condition where the kidneys are damaged and are unable to filter blood properly. As the disease progresses slowly over a long period of time it is called as chronic kidney disease.


Hyperkalemia is a term that describes high potassium levels in the blood.

Hyperkalemia is a complication of chronic kidney disease. The main risk factors for hyperkalemia are the abnormalities in the mechanisms of renal excretion, presence of cardiovascular diseases or diabetes.

Recommended renal diets are vegetables, fruits, nuts and pulses. Renal diets are thought to favor hyperkalemia as they are all rich in potassium.

The nutritional therapy in CKD aims to reduce the intake of foods that result in the production of waste substances that kidney failure patients cannot excrete.

The implementation of vegetable based renal diets are limited by fear if inducing hyperkalemia. Hence, the research study focused on the risk of hyperkalemia in patients on plant-based versus animal-based low protein diets (LPD).

The study included patients affected by CKD stage I-VND. They were followed up at the renal nutrition clinic from November 2014 to May 2019.

There was a total of 219 patients who had about 870 visits in the clinic. Hyperkalemia was defined based on the potassium serum level as:

Biochemical data, anthropometric data, and medications of all the patients were recorded.

The key study findings are:

The authors concluded that plant-based low-protein diet is not associated with high prevalence of HK with respect to animal-based low protein diet at the same residual kidney function.

Rural Mendocino County had finally figured out its vaccination program. But now ...

Tedros Adhanom Ghebreyesus, the director-general of the World Health ...