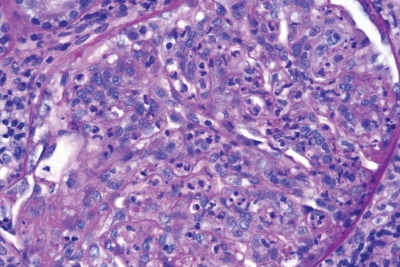 Mycophenolate mofetil (MMF) may be superior to cyclophosphamide (CYC) in improving serum complement C3 and complete remission, with fewer adverse drug reactions, in the induction treatment of lupus nephritis; however, CYC may be superior to MMF among Asian patients and those with low baseline urine protein levels, according to study results published in Medicine.

The treatment of lupus nephritis includes an induction phase to produce remission, and a maintenance phase to prevent relapse and progression to end-stage kidney disease. The objective of the current meta-analysis was to determine the efficacy and safety of MMF vs CYC as induction therapy for lupus nephritis.

Researchers searched PubMed, EMBASE, Wiley, and the Cochrane library databases for randomized controlled trials with patients with lupus nephritis receiving induction treatment with MMF, CYC, or a combination of MMF/CYC with other drugs. Of 63 full-text articles extracted for detailed assessment, 18 articles with a total of 1989 patients were included in the meta-analysis.

The primary end point of the analysis was response to urine protein, serum creatinine, and serum complement C3, with complete remission and adverse reactions as the secondary end points.

Among Asian patients, and not Caucasian patients, treatment with CYC was superior to MMF in lowering levels of urine protein (SMD, 0.405; 95% CI, 0.081-0.730). In another subgroup analysis that considered severity of disease, CYC was superior to MMF in patients with daily urine protein levels less than 4 g per day (SMD, 0.303; 95% CI, 0.014-0.591), but there was no difference between the treatments in patients with more significant proteinuria.

A total of 7 studies compared the efficacy of MMF and CYC in improving serum creatinine, results of which showed that there was no significant difference between both the treatments (SMD, 0.090; 95% CI, -0.060 to 0.239).

The risk for infection in Caucasian patients, not Asians patients, was lower in those who received MMF vs CYC (RR, 0.727; 95% CI, 0.532-0.993). Treatment with MMF reduced the incidence of leukopenia and menstrual abnormalities in Asian patients (RR, 0.187; 95% CI 0.077-0.452), but the effect was not statistically significant in Caucasian patients.

The meta-analysis had several limitations, including the limited number of study participants, potential bias secondary to variations in sample size of each study, and differences between studies in characteristics of the participants, trial design, and therapy plan.

“MMF precedes CYC in improving serum complement C3 and complete remission regardless of race, as well as shows fewer adverse drug reactions in the induction treatment of LN belonging to type [3-4]. But for Asian patients or those initial [urine protein] levels are less than 4g [per] day, CYC may be superior to MMF,” the researchers concluded.

Discontinuation of the terminal complement inhibitor eculizumab in patients with...