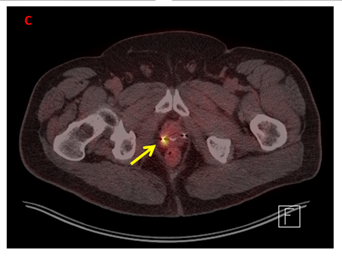 The finding is from the EMPIRE-1 (Emory Molecular Prostate Imaging for Radiotherapy Enhancement) trial, the first randomized trial comparing the 2 approaches. Investigators randomly assigned 165 patients to receive external beam radiation therapy (EBRT) based on conventional imaging (bone scan plus CT or magnetic resonance imaging [MRI] of the abdomen and pelvis) or conventional imaging plus fluciclovine PET/CT.

To be enrolled in the study, patients needed to have detectable PSA following radical prostatectomy, negative bone scans, and no extra-pelvic metastases found on CT or MRI scans of the abdomen or pelvis. The treatment arms were balanced with respect to age, race, PSA level, androgen deprivation therapy use, and pathologic characteristics.

The median follow-up duration was about 2.5 years overall and 3.0 years for the failure-free patients. A total of 125 patients had a minimum follow-up duration of 3 years. The 3-year failure-free survival rate, the study’s primary endpoint, was significantly greater in the PET/CT group than in the control group (75.5% vs 63.0%), co-principal investigator Ashesh B. Jani, MD, of the Winship Cancer Institute at Emory University School of Medicine in Atlanta, Georgia, reported in a late-breaking abstract session. The 4-year failure-free survival rate also was significantly greater in the PET/CT group (75.5% vs 51.2%). On multivariable analysis, patients in arm 2 were twice as likely to have failure-free survival compared with controls.

Toxicity was similar in both study arms, suggesting the PET-guided treatment was well tolerated, Dr Jani and colleagues reported.