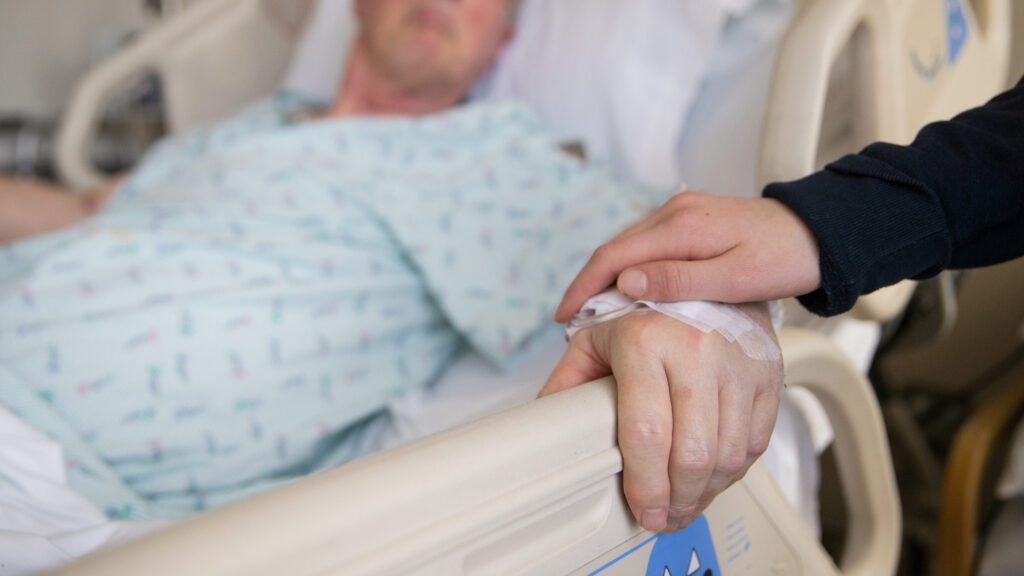 On the day I was supposed to start my intensive care unit rotation as a fourth-year medical student, I walked into an ICU 3,000 miles away as a visitor.

My dad, who has been living with cancer since my first year of medical school, was recovering from emergency surgery for an infection. Awake but unable to speak because of a plastic tube in his airway, he grabbed a piece of paper and scribbled, “Glad you’re here.” Unable to find my own voice, I nodded in agreement.

In the weeks that followed, I was reintroduced to the health care system I thought I already knew. Despite knowing how much compassionate and endless effort doctors, nurses, and other clinicians put into patient care, I was humbled by seeing my father and family struggle to understand the care he needed, and by how much effort it took on our part to ensure he received it.

From inside my dad’s hospital room, I witnessed parts of hospitalization I had never seen up close. Instead of placing orders for a patient’s antibiotics every six hours through a computer, I saw how exhausted my dad looked after his antibiotic drip finished in the middle of the night and the machine’s alarm went off next to his ear. Instead of calling consults for my patients, I twiddled my thumbs waiting for wound care nurses, plastic surgeons, infectious disease specialists, and others to stop by, seemingly right when my dad found a moment to shut his eyes.

In the mornings I’d peer through the narrow window to the hallway and watch the medical student present my dad’s case to the care team. I felt a pang of exclusion as this scene played out beyond earshot — I preferred being cast as the medical student, not as the relative at bedside. The team talked shop about labs and medications for 10 minutes before flooding the sand-colored room in a sea of blue and green scrubs to give my dad and me a one-minute summary.

As a medical student, the hospital is one of my favorite places to be. As a daughter, I dreaded every minute spent there. In my role as student, I understood the hospital’s inconveniences. But I never felt them viscerally until my dad faced them: the embarrassment of urinating in a plastic container and wearing an open-back gown; the irony of being told to “get some rest” after being awakened at 2 a.m. for a blood pressure check; the distance between patients and their providers; the confusion at conflicting or limited information, often rife with medical jargon.

“Putting in a PICC isn’t ideal as it’s obviously a nidus for infection,” the attending physician said to my dad one morning, who faked a nod of understanding.

I later translated: “Running a tube from your arm to the veins around your heart to give you antibiotics isn’t ideal because bacteria like to cling to those tubes and can cause other infections.”

Over and over, I felt grateful for my medical training — and also stunned by how often I had to rely on my knowledge to advocate for my father.

When my dad was out of surgery and no one had told us what the next steps were, I knew to call the hospital operator and ask to speak to his nurse in the post-anesthesia care unit who, with some gentle prodding, handed over the phone to the resident who had assisted in his operation. On morning rounds, I knew which of my dad’s labs and test results to ask about so we could gauge his progress as the attending physician said things like, “Your numbers look mostly good.”

I also spent hours coordinating between his cancer doctors and the team taking care of him in the hospital. I requested that his records — descriptions of his surgery and pathology reports — be sent to his cancer team. When their opinions contradicted those of the physicians on site, I helped my dad make his own informed decisions. I repeatedly reminded him that his care is his choice, even though it often feels like doctors call the shots.

When I wasn’t his advocate, I was his well-informed caretaker: I brought him a warm sweater, hand cream, tomato soup, and newspapers and magazines. When he was moved from the ICU to the main hospital ward, I told my generally highly active father to ignore the neon yellow “fall risk” sign hanging on his door as we took several walks down the hall each day to rebuild his strength.

My dad acted as his own advocate too. He told me that before I had arrived, when he had woken up and realized he was intubated, he signaled to ask for something to write with. When he no longer needed to be on the ventilator, he fended for himself more easily. When his care team changed his antibiotic regimen and, later that evening, a nurse tried to administer the old medication, my dad spoke up and corrected her. When the team decided to discontinue his blood work and two different phlebotomists stopped by to draw his blood, my dad was able to prevent the unnecessary pokes.

I worried about how much effort he had to put in to ensure his care after visiting hours ended. I texted him medication names, and he called and put me on speakerphone anytime a doctor came in with updates. Having dealt with all types of family members on my clinical rotations, I’m sure I was a nuisance to the care team. I can imagine what they might have said: “The med student daughter is asking so many questions,” likely accompanied by an eye roll.

On my own hospital rotations, I’ve seen at the bedside sister radiologists, son nurses, daughter-in-law surgeons, and other combinations. Exhausted and juggling so many patients at once, my colleagues and I received these relatives with a mix of camaraderie and mild annoyance.

But I also saw that these relatives had a better understanding of their loved ones’ care — and consequently the care itself was better. Their advocacy was, of course, bolstered by their expertise, but just as much by the fact that they never hesitated to ask questions. As much as medicine is moving toward shared decision-making, the reality is we’re not all the way there yet. When patients and their family members ask for explanations or question decisions, they remind doctors to act more carefully and be more deliberate about deciding the right treatment for each unique patient.

I took a cue from these relatives and asked all my questions.

It shouldn’t take a medical degree to ensure great care. I wish that doctors had infinite time to bridge the gap between their knowledge and that of their patients and patients’ families, but they don’t. Our hospital systems don’t allow for the highest-quality physician-patient interactions, and they sadly don’t prioritize patients’ sleep, dignity, or even understanding of their own health. Instead, hospitals put a premium on efficiency, often at the cost of confusing patients and reinforcing power dynamics that stifle shared decision making. Sometimes medical teams spend 15 minutes talking about patients’ bodies outside their rooms, and only 30 seconds explaining their thoughts directly to them. How can we expect patients to make informed decisions about their care when clinicians don’t — or can’t — take enough time to inform them in the first place?

I hope my advocacy will streamline my dad’s recovery and ease some of his discomfort and stress. But I also hope it will help me become a better physician — a better surgeon, specifically — one who listens intently, explains clearly, and advocates for my patients like I’ve done for my dad.

But I hang the bulk of my hope on a vision of a different medical system. One in which anyone, with any level of medical literacy, can make informed decisions. And where patients and family members don’t have to advocate vigilantly for their own care. My dad, and all of our loved ones, deserve better.

Orly Nadell Farber is a fourth-year student at Stanford University School of Medicine and a former STAT intern.

Blood pressure is often assessed during daytime. It helps to determine a ...

Delirium may be an early warning sign of Covid-19 infection in older adults, a ...